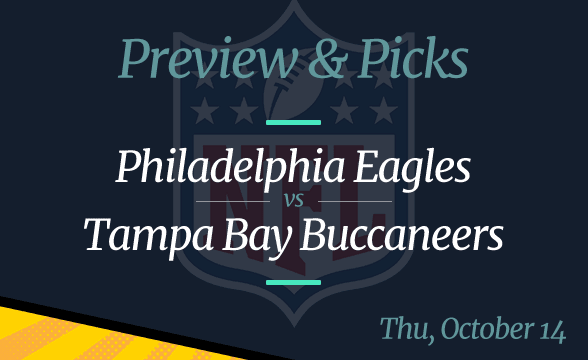 The Tampa Bay Buccaneers and the Philadelphia Eagles meet in the Thursday Night Football game, with both teams coming off a win in Week 5. The Buccaneers were superior to the Miami Dolphins in the interstate clash, which finished 45-17 for Tom Brady and Co. Meanwhile, the Eagles beat the Carolina Panthers 21-18.

All odds are per DraftKings as October 11.

The Bucs beat the Dolphins 45-17 last Sunday, which was their most dominant win in almost a year. They did alright in the defense, conceding the least number of points per game this season. Still, despite that, it was their offense that stole the show.

Tom Brady was nothing short of spectacular, completing 30 of 41 passes for 411 yards and five touchdowns. As a result, the 44-year-old is now the current leader when it comes to passing yards (1767), and is second on the list of QBs with most the touchdown passes (just behind Patrick Mahomes).

Knowing all this, it’s only natural to assume he’s going to continue playing superb football. This goes especially because he seems to love playing against the Eagles. In fact, his record against this team is 5-2 (4-1 in regular-season games).

However, all of those games happened with Brady wearing the Patriots jersey. Since arriving in Tampa, he still hasn’t played against Philly.

Philadelphia’s Morale Must Be Sky-High

The Eagles got their second win of the season last Sunday when they beat Panthers, who entered the game as the favorite. Everything started well for Carolina, who had a five-point lead until the 13th minute of the final quarter.

It was with 12:22 on the clock when Eagles QB Jalen Hurts scored a touchdown, which was followed by a two-point conversion by DeVonta Smith.

Thanks to this win, the Eagles are now 2-3, which puts them in second place in the NFC East. They’re currently behind only the Dallas Cowboys, who are 4-1 at the moment. Still, the season is long, and the Eagles now have confidence on their side.

They will have that confidence against the Bucs, but the player quality is on the side of the opposition this time. It seems they will have to wait a while longer for their third win of the season.

Pick: Tampa Bay Buccaneers to win and cover the spread; the over should hit.