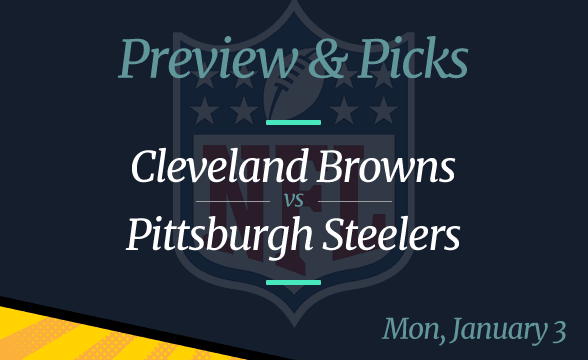 Cleveland Browns vs Pittsburgh Steelers is the final game of the NFL Week 17. The winner of the game could propel itself high in the AFC Standings as both teams have seven wins so far. The Browns are 7-8, while the Steelers have a 7-7-1 record in 2021.

Oddsmakers think the Browns will win, but the same was the case in their first game of the season when we saw the Steelers beating them in Cleveland.

All odds are per FanDuel as of December 28.

Baker Mayfield Needs to Step Up on Monday Night Football

The Cleveland Browns lost three of their previous five games, scoring a total of only 83 points in that period. That accounts for just 16.6 points per game on average. If they wish to win the MNF game, they need to do much better in the offense.

The man in charge of their offense is their quarterback Baker Mayfield, who’s coming off a pretty sloppy performance against the Green Bay Packers last weekend. Although he did throw for two touchdowns, he also had four of his passes intercepted by the Packers’ defense. Four interceptions in a game is something that Mayfield hadn’t previously experienced.

The Browns’ fans expect more from their QB and he definitely looks like someone who could deliver. The trouble is that their rivals from Pittsburgh are also motivated to get a win.

Their record is 7-7-1, meaning that their win percentage currently stands at .500. If they win on Sunday, they will get to a positive win percentage, which could mean getting to the postseason. Still, that’s way easier said than done.

They did beat the Browns in their first duel of the season, which took place on Halloween. The score was 15-10 for the Steelers, mostly thanks to a superb performance by their defensive team. Can they repeat it?

Probably not, judging by how disastrous they’ve been over the last couple of months. In the last six weeks, we saw them conceding 36 or more points in four games. Against motivated Browns’ offense, we could see them conceding a lot once again.

Picks: Cleveland Browns to win and cover the spread; over to hit