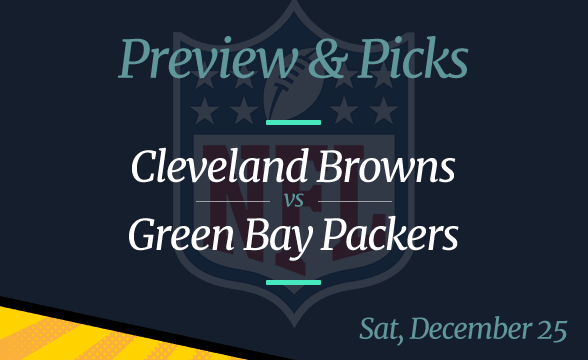 The Green Bay Packers are in a celebratory mood after securing the NFC North title in the previous week. What this means is that they can enjoy and have a lovely Christmas Day, which is when they welcome the Cleveland Browns at Lambeau Field.

That said, they’re coming to Green Bay with a win on their minds. Knowing that the Packers are 6-0 at Lambeau Field in 2021, causing them their first home loss of the season would be a sort of Christmas miracle.

All odds are per FanDuel as of December 21.

The Browns are 7-7 right now, which still keeps them in the competition for the AFC North title. They might be on the very bottom of the divisional table, but the team from the top (Cincinnati Bengals) has only one win more than them.

Even if they don’t succeed in winning the divisional title, they could still get to the postseason via Wild Card. With a .500 record, they’re currently 11th in the AFC Rankings, which isn’t good enough, but they do have a chance to improve.

Actually, they had a good chance to improve their record and get to 8-6 in their Monday Night Football clash with the Las Vegas Raiders. Unfortunately for the Browns, they ended up losing 16-14, the main reason being that they played with their third-choice quarterback Nick Mullens.

The reason? Both the Browns starting QB Baker Mayfield and his backup Case Keenum tested positive for COVID-19 before that game.

The good news is that Mayfield could return before Christmas. The story goes that he caught the virus after Week 14, even though he’s vaccinated. As he had no symptoms, Mayfield was hopeful he would test negative ahead of the Raiders game. His wish didn’t come true.

However, one week later, it’s very likely he will test negative. And if he tests negative twice in 24 hours, he will be allowed to play on Christmas Day.

Aaron Rodgers Wants to Break a Record at Home

The Packers beat the Baltimore Ravens in Week 15, which won them the NFC North title. The game saw their quarterback Aaron Rodgers throwing three touchdown passes. By doing that, the reigning MVP tied the franchise record for most touchdown passes.

With 442 TD passes, Rodgers is now tied with another Green Bay legend, Brett Favre, with a chance to break that record on Christmas in front of his faithful fans.

Knowing that he’s thrown a total of 15 TD passes at Lambeau Field in the 2021 season, it’s almost certain he’ll break Favre’s record. The question is whether that will be enough to beat the super-motivated Browns?

Well, the answer depends on several factors, the most important being Baker Mayfield. If he returns, the Browns’ chance of winning will skyrocket.

Picks: Cleveland Browns to win; over 49 to hit

PILOT Bill in NJ Has Been Passed, Gov. Phil Murphy Is Set to Sign It