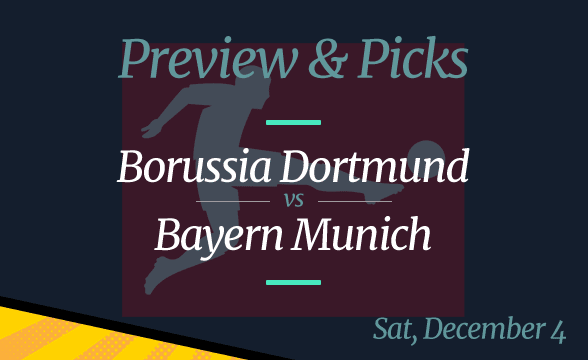 The Borussia Dortmund vs. Bayern Munich game on Saturday, December 4, is going to be the 132nd Der Klassiker. The clashes between the two most successful German soccer teams are always exciting, and this one should be no exception.

Although both sides have serious problems with absentees, you can be sure each will give its utmost on the field. It’s because the 2021-22 Bundesliga has been a two-horse race between Borussia Dortmund vs. Bayern Munich, with just one point separating the two.

Dortmund Hoping for the Eight Home Win of the Season

Borussia Dortmund is 7-0 at home in the Bundesliga. The Signal Iduna Park, a.k.a. the Westfalen, is the largest sports venue in Germany as well as one of the most visited stadiums in the entire world. Dortmund’s loyal supporters are always there to support their teams, which seems to be working.

Evidence of this is not just that they have an impeccable record in the German top-flight; they’re also superb in other competitions – the German Cup, Champions League, and so on.

What’s worrying is that the formula doesn’t seem to apply to Dortmund’s games with Bayern Munich. In each of the previous four Der Klassikers played in Dortmund, the visiting team was the winner. Are we going to see Bayern adding another win to the list?

Oddsmakers think so, and one of the main reasons is that Dortmund’s roster is decimated with injuries. There are at least nine players who are certain to miss the game, including some crucial ones like Jude Bellingham, Raphael Guerreiro, Thorgan Hazard, and Giovanni Reyna.

Bayern Munich is at the top of the Bundesliga at the moment, but Dortmund is just behind. With just one point between them, Bayern needs to worry about staying in the #1 place. The main reason for concern is that the German champ hasn’t been playing very well lately.

After a brilliant start of the season with nine wins in all competitions, Bayern Munich suffered its first defeat. It happened on October 3, when Eintracht Frankfurt beat them 2-1 in Munich. Bayern bounced back straight away, but a few weeks later, we saw them failing again. On October 27, Bayern lost 5-0 to Borussia Monchengladbach in the German Cup.

More recently, we saw Bayern losing to Augsburg 2-1 on November 19. They then went to win the next two games but each time by just one goal. Knowing how awesome Bayern players are, it’s really strange that they haven’t been more dominant.

Still, Der Klassiker seems like an ideal opportunity for Bayern to get back in shape. The thing is that their players seem to love playing against this opponent. This goes especially for Robert Lewandowski, who scored a total of five goals in the previous two games between the two.

Aristocrat Acquisition of Playtech Still on Course to Complete in Q2, 2022