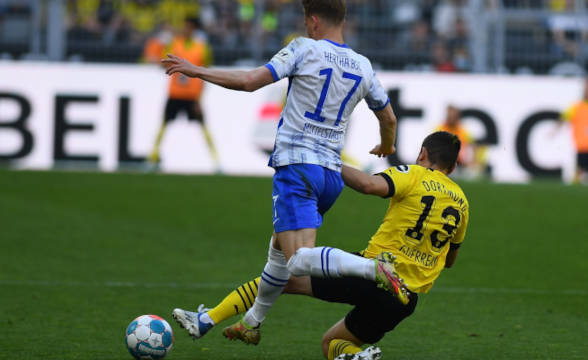 Borussia Dortmund vs Bayern Munich a.k.a. Der Klassiker is the biggest game in German soccer. So far, the two have played a total of 133 games, with Bayern leading the all-time series 66-34-33. Oddsmakers think the team from Munich will add another win to the list. Are they right to think so? To see what we believe is going to happen on Saturday, make sure to read this Der Klassiker preview until the very end.

Saturday’s game will be played at Borussia Dortmund’s home arena, Westfalenstadion, which is the largest soccer venue in Germany. At home, this team is always hard to beat, although Bayern did manage to do it in each of the previous four Der Klassikers played in Dortmund.

Bayern scored a total of 10 goals in those four games, with five goals being the work of Robert Lewandowski. Now that he’s no longer a Bayern player, Dortmund might stand a better chance.

The bad news for the hosts is that their injury list looks very long. The good news, however, is that the players who are fit have been playing great lately. For instance, Borussia Dortmund destroyed Sevilla on Wednesday 4-1 on the road in the Champions League. Unfortunately for them, Bayern players too are coming off an impressive performance in Europe.

On September 17, Bayern suffered a surprising defeat in the Bundesliga. They lost 1-0 to Augsburg on the road, which made soccer fans wonder if they’re going to do okay in their first season in the post-Lewandowski era.

They proved everyone wrong in the following two games, both of which they won with a clean sheet. First, they destroyed Bayer Leverkusen 4-0 in the Bundesliga; then, they beat Viktoria Plzen in the Champions League 5-0.

In the previous 10 Dortmund vs Bayern duels, we saw a total of 41 goals, meaning that these two scored over four goals combined in Der Klassikers. We think this trend will continue, meaning that “over 3.5 goals” looks like a very good bet. When it comes to the match-winner, our pick is Bayern. It’s just that when you compare the players, this is the team that has all the advantages.