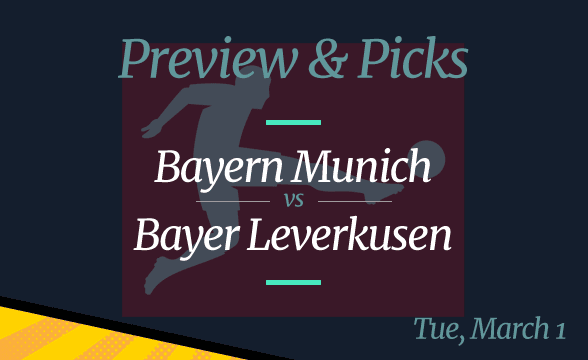 Bayern Munich continues its crusade for the tenth straight Bundesliga title. The reigning champ is sitting at the top of the table with eight points more than the second-placed Dortmund and 14 more than Bayer Leverkusen, the team in the #3 position.

Bayer Leverkusen might not have title ambitions anymore, being 14 points behind Bayern, but these guys would love to finish in the top 4. The reason? Those teams get to play in the Champions League. That said, Leverkusen surely has the motivation to try and grab at least a point from Bayern. The bad news for them is that Bayern has player quality on its side. Which will prevail on Saturday?

Bayern Munich lost four games in the Bundesliga this season, with two of those defeats happening since the start of 2022. They also failed to beat Salzburg in the Champions League. Speaking of which, the second leg of the doubleheader is on the program just three days after the game with Bayer Leverkusen. Does this mean Bayern players will already be focused on the UCL game?

That could be the case as the elite European competition seems like Bayern’s #1 priority at the moment. Still, even with their minds set on the next game, Bayern players definitely have the capabilities to win on Saturday.

It’s just that this team has amazing players on the roster, which are among the best on the planet. However, there are some players who will miss the Leverkusen game due to injuries. One of those is Bayern’s first-choice goalkeeper Manuel Neuer. His replacement Sven Ulreich conceded a total of six goals in Bayern’s previous four games.

With 75 goals in 24 goals, Bayern Munich is the highest-scoring team this season. No surprise there. However, what’s surprising is that Bayer Leverkusen has already scored 63. In comparison, last season, this team scored 53 in 34 matches.

Their top scorer is Peter Schick, the man who has 20 goals to his name at the moment. That puts him in second place in the list of Bundesliga top-scorers, behind Bayern’s Robert Lewandowski (28 goals).

The most impressive fact about Bayer Leverkusen’s offense is that they’ve been scoring a lot of goals in the last couple of weeks. This team scored 19 goals in the past five Bundesliga games. This includes five against Dortmund at Westfalen.

Knowing all this, no one should be surprised if Bayer Leverkusen manages to put away a few goals on Saturday. But will it be enough to get a point or points? Probably not…