FL Entertainment Will Bring Together Banijay and Betclic

Betclic is Courbit’s online gambling group that will be merged with an additional SPAC named Pegasus Entrepreneurs Acquisition Company Europe. The latter has already gone public on Euronext Amsterdam and was created by Tikehau Capital together with Financière Agache. The new banner will be listed on EuroEuronext Amsterdam starting July 1 and it will have the support of a series of shareholders in Betclic and Banijay.

FL Entertainment’s enterprise value will rise to €7.2 billion ($7.6 billion) or the equivalent of €4.1 billion ($4.3 billion) in equity value. The enterprise will also trigger a revenue of €3.5 billion ($3.62 billion), as well as adjusted earnings before interest, tax, depreciation, and amortization set at €609 million ($633 million). Most of the money will be brought in by Banijay, the company known for a series of highly popular TV shows such as Deal or No Deal, Big Brother, Fort Boyard, and the previously mentioned Peaky Blinders and Survivor.

The fresh deal will bring together all the subsidiaries belonging to Betclic Everest. This list includes the bet-at-home subsidiary part of Frankfurt’s Xetra stock exchange.

After attracting €220 million ($229 million) in private investment in public equity (PIPE) funds, together with an additional €400 million ($260 million) in additional funding from Financière Lov, Financière Agache, Tikehau Capital, and a series of non-redemption commitments, the new SPAC wants to attract even more funds. The extra money would help Betclic attract new players through innovation and better user experiences. The money will also be used to retain more customers while improving loyalty. Betclic’s database of players is expected to go up by 18% in 2022, going over the $1 million mark from 893,000 average players a month.

Courbit called the public listing via the Pegasus partnership “a milestone in the history” of the group while expecting significant growth in the entertainment industry. At the end of January, Banijay decided to expand its partnership with Blueprint Gaming. 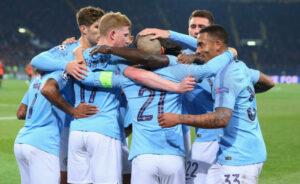 Business May 12, 2022
Camelot Says It Will Go Bankrupt if National Lottery License Goes to Allwyn