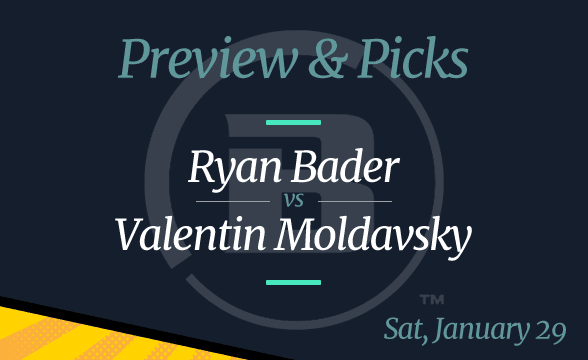 Bellator 273 brings us a title bout between the reigning heavyweight champion Ryan Bader and interim champ Valentin Moldavsky. Bader, who’s a former UFC fighter, is coming off a loss at Bellator 268 in a  Light Heavyweight bout. That was only his second loss in the promotion and his seventh career defeat.

What’s interesting is that Bader is still undefeated in Bellator MMA in the Heavyweight category. Meanwhile, his opponent is coming to Bellator 273 after a win over Timothy Johnson last June, which earned him the interim Heavyweight title. That was Moldavsky’s sixth straight win in Bellator and his 11th overall win. So far, in his seven years’ long professional career, Moldavsky has only one loss.

All odds are per MyBookie.ag as of January 25.

The 38-year-old American fighter has a 28-7 record in his pro career that started back in 2007. Over the years, Bader competed in several promotions, including the UFC where he fought 20 bouts. In 2017, Bader signed for Bellator, winning the Light Heavyweight World Championship in his first fight.

In the next couple of years, we saw him defending the title, as well as moving up a division. In the Bellator Heavyweight World Grand Prix Final, Bader defeated legendary Fedor Emelianenko by TKO.

It happened in 2019 and for nearly a year, Bader held two Bellator titles. He lost the Light Heavyweight title in summer 2020 to Vadim Nemkov. A year later, he started his comeback, but his campaign ended in the semifinal of the Bellator Light Heavyweight World Grand Prix in October 2021. He lost to Corey Anderson in that fight, who won by TKO after just 51 seconds.

Moldavsky is a protégé of legendary Russian MMA fighter Fedor Emelianenko. Same as his trainer, Moldavsky too is an expert at sambo, a combat sport focusing on wrestling. This explains why three of his 11 wins happened by submission, while he won only once by knockout.

Still, most of his fights were ended by decision. In fact, he won seven fights this way and his only career loss happened by a decision as well. Further, four of his previous Bellator fights were also decided by the judges.

Will the Bader vs Moldavsky fight have the same fate? Probably, as there’s so much at stake. Neither fighter is willing to risk an early knockout/submission, meaning that it’s likely the fight will last until the final bell. But who’s going to be scored the winner?

It’s going to be a close decision, but the oddsmakers think of Moldavsky as a -320 favorite for a reason. In 2022, he looks like a better fighter than Bader.