The assault on the gambling venue happened in the early hours of October 12, 2022. According to  Mexico Detail Zero, armed assailants entered the venue when it was about to close. The exact number of perpetrators is yet to be determined, but what is known so far is that they were armed. Upon entering the venue, the criminals intimidated the casino staff and collected approximately $90,000. The money was separated into $20,000, as well as approximately MXN1.3 million ($65,013).

Besides cash, the criminals took off with personal belongings that belonged to the casino employees, including cell phones among other personal items. There is a possibility that the armed bandits knew the venue well because the robbery itself did not take long. After looting the cash and cell phones, the armed men left the casino and escaped via different vehicles.

Once the criminals left the venue, Casino Life’s employees contacted the police. A large-scale police search was launched with authorities also reviewing the recorded footage of the casino robbery and trying to identify the armed bandits or their vehicles.

Then, the police identified one of the vehicles and were able to apprehend two individuals, allegedly involved in the robbery. According to a statement released via Twitter from Omar García Harfuch, the secretary of public security for Mexico City, the two men arrested in relation to the robbery had a firearm, as well as 6 cell phones – belonging to the casino employees.

Still, nothing was mentioned regarding the hefty sum the two bandits stole. Harfuch confirmed that the investigation of the casino robbery continues. So far there are no reports of anyone being harmed during the robbery. 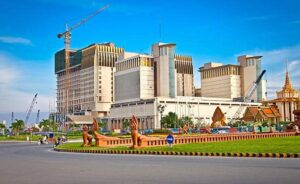