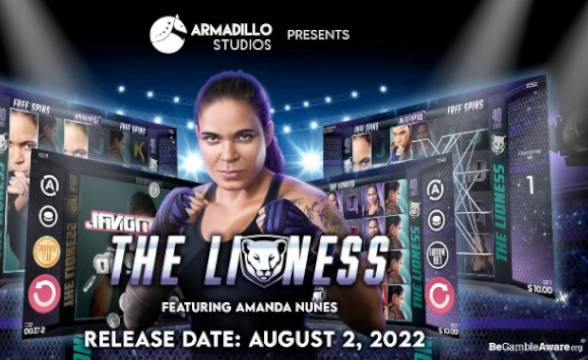 Up-and-coming iGaming and slot developer Armadillo Studios is set to release its first branded slot in the company of Amanda Nunes, the Brazilian MMA fighter whose nickname has inspired the name of the game. In The Lioness, players will have the opportunity to enjoy excellent, math-driven gameplay as early as August 2 while still feeling closer to their hero.

Nunes’ global presence will help Armadillo Studios reach new audiences around the world and benefit from the fighter’s likeness and image. The fighter is popular back home, but she is also very famous in the United States, where Armadillo Studios hopes to market the slot.

A far more important mission for the company remains the introduction of a more gender-balanced playing field in slots. Seldom do slot games get a female character as the personality they are built around. This is about to change with Armadillo Studios helping buck this trend.

The slot’s release is equally well-timed as well as it comes shortly on the heel of Nune’s fight against Julianna Peña in Dallas this July 30. The fighter is hopeful that she can win back her UFC Bantamweight Champion. Commenting on this upcoming release, Armadillo Studios was very excited as well:

Amanda Nunes is an ambitious fighter who doesn’t show weakness in her matches, being one of the best ground wrestlers in MMA and going toe-to-toe with the world’s most skilled fighters.

According to the company, the slot successfully captures Nunes’ career in the UFC, and fans are brought closer to the MMA experience through interactive mechanics, free spins, and other more unique twists, such as the Lioness Link Bonus, Fight Feature, and Fortune Bet.

Armadillo Studios Happy with the Slot

According to Armadillo Studios COO David Stoveld, fans can expect to discover a smooth and worthwhile experience from beginning to end:

The Lioness slot has really come together, and we are proud of the final game product as well as the opportunity to work alongside the legendary Amanda Nunes.

The slot promises to hit home with UFC audiences and particularly those who have been following Nunes’ career with a mix of trepidation and excitement. Here is fans’ opportunity to get closer to the action and risk none of the downsides walking into the octagon usually entails.

B2B gaming provider 7777 Gaming has partnered with Inbet and will now officially help the operator spearhead its proposition in the fast-developing Bulgarian iGaming market. Inbet, which has recently secured a permit to operate in the online gambling market in the country, will be able to do so while delivering on a range of experiences, […]

Push Gaming continues to grow its footprint in the Dutch gambling market with the B2B gaming supplier entering a new competitive deal with Play North, an established local operator of iGaming products and entertainment. The partnership enables Push Gaming to deploy a number of its own unique and player-favorite games which are now available to […]