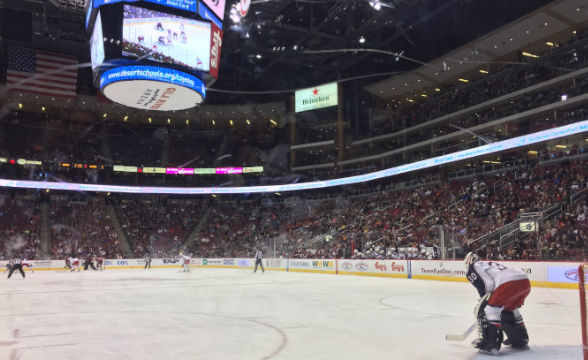 The Arizona Coyotes are happy with the way sports betting in the state works – they get a share out of the total handle and that is definitely a neat arrangement for the National Hockey League (NHL) franchise. However, the team wants to make sure that they keep offering mobile sports gambling once they pack up and change their home arena in Glendale to Arizona State University’s hockey arena next season.

Change Is Not Necessarily Bad, But Few Issues Persist

However, there are certain regulatory potholes that could make the road ahead bumpy. Arizona Coyotes are facing opposition from Arizona Indian Gaming Association and Native American tribes who aren’t happy with the franchise’s ambition to bring sports gambling to their new arena.

There are constitutional problems and the deal negotiated between the tribes and Gov. Doug Ducey in 2021 under a gambling compact does not apply to venues that can accommodate fewer than 10,000 people.

The Coyotes’ new venue is only going to be able to host up to 5,000 people, and this is an issue. The team is taking temporary refuge in the ASU’s arena, while they work on their far more ambitious $1.7-billion project which will see their hockey arena refurbished with plenty of room for other things to do, apart from hockey, including dining experience, shops, apartments, and naturally – a new ice rink.

However, the arena would take three years to build and the Coyotes would not like to lose revenue from hosting mobile sports gambling in the interim. But, the Coyotes do argue that they have a way around that as they want to keep operating their mobile sports betting out of the new venue, and not host a retail sportsbook.

Andrew Diss, who spoke for the Coyotes, there is still some lack of clarity on whether the team can actually do.

Nobody Really Sure on Status of Mobile Gambling for Coyotes

“You get 10 different answers,” Diss said. An attorney for the Arizona Indian Gaming Association though has argued that no legal change should be enacted on a law that was passed just a year ago and just because the Coyotes have not considered their plans earlier. Attorney Bradley Bledsoe Downes said:

“That was a compromise by the tribes and as well as the professional leagues and teams, and to go back and change that understanding, especially less than a year later, for something that is really self-created shouldn’t land at this body to address.”

But there are those who want to help the Coyotes especially given that the team will spend another $40 million to improve ASU’s new multi-purpose arena. For Sen. Sonny Borrelli the tribes’ opposition boils down to an “unnecessary turf war.” Be that as it may, the Coyotes may see an outcome that they did not anticipate or were hoping to avoid.

Juventus vs Inter Milan Serie A Odds, Time, and Prediction