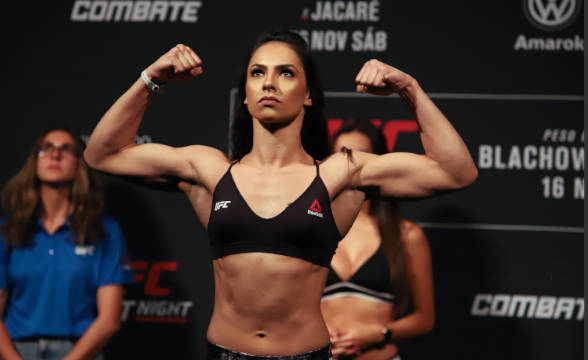 Ariane Lipski vs. Priscila Cachoeira was originally scheduled for last weekend, but Lipski didn’t get medical clearance to fight. Plus, she missed weight by 2.5 pounds over the flyweight limit. The UFC moved the matchup to Saturday, August 13 – UFC on ESPN 41 – with the fight now being a women’s catchweight duel.

Lipski doesn’t have to worry about her weight anymore, but there still might be some concerns regarding her health. Is that something Cachoeira can take advantage of? Oddsmakers don’t think so – they still favor Lipski to win.

However, we feel as if Cachoeira might be able to cause an upset. To see why we think that, just keep on reading our Lipski vs. Cachoeira preview.

All odds are per FanDuel as of August 11.

According to MMA reporter Evy Rodrigues, Lipski was rushed to the hospital after the weigh-ins ahead of last week’s UFC event. Apparently, she fell ill after trying to cut weight – which she failed to do.

Reportedly, the reason why Lipski was unable to get to 126 pounds is that she had COVID during her training camp, which affected the weight-cut process.

Lipski is okay now and is scheduled to fight at UFC on ESPN 41. She won’t be forced to lose weight – the fight with Cachoeira is going to be a catchweight bout. However, she might not be at her best on Saturday.

If she were 100% fit, we’d too consider her a huge favorite in this bout. After all, she is 14-7 in her professional career throughout which she’s fought against some elite opponents. However, knowing that she’s had health issues, we think she isn’t going to do much at UFC on ESPN 41.

Cachoeira is turning 34 just six days after UFC on ESPN 41. Her career record is 11-4, which isn’t at all bad, but she now has a chance to take it to the next level. Getting a win on Saturday could open the doors to much more important fights for Cachoeira in the future.

The big question is whether she can pull it off. Her record seems decent, but most of her wins happened before she joined the UFC. In this promotion, however, she is 3-4. To be fair to her, she did lose to some real elite fighters, most notably Valentina Shevchenko.

Further, in her most recent fight, Cachoeira demonstrated her iron will, taking the fight with Ji Yeon Kim to the distance and winning by unanimous decision.

Lipski is probably the better fighter, but she probably isn’t ready for this fight. Not only does she have fitness concerns, but knowing that she contracted COVID during her training camp, she probably hasn’t had much time to prepare for the fight. At least not as much time as Cachoeira.