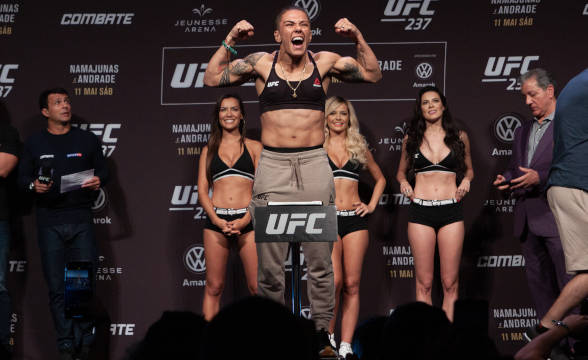 Jessica Andrade is the former UFC Strawweight champion who fought three previous bouts in the flyweight division. This Saturday, however, she’s coming back to the strawweight division with a fight against Amanda Lemos.

The Amanda Lemos vs Jessica Andrade fight is the headliner bout of UFC Fight Night 205. If you would like to learn more about the fight, you’re in the right place. We’ll now analyze Lemos vs Andrade odds, discuss fighters’ stats, and share some betting picks.

All odds are per FanDuel as of April 18.

Is Amanda Lemos the Next Big Thing in the UFC?

Sure, she’s already in her mid-thirties but Lemos has only started her rise in the UFC. In fact, she joined the promotion in 2017, losing to Leslie Smith by TKO on her debut.

Two years later, she made her comeback, moving from bantamweight to the strawweight division. From there, she’s won all of her fights – five in a row.

Lemos did defeat some big-name fighters, but she still hasn’t fought as high-profile a fighter as Jessica Andrade.

In May 2019, Andrade defeated Rose Namajunas by KO in a battle for the UFC Women’s Strawweight Championship, earning herself the Performance of the Night bonus along the way. In August of the same year, Andrade lost her title to Zhang Weilli.

Her next fight was a rematch with Namajunas, although this time, no titles were at stake. It happened in 2020 and Namajunas got her revenge.

After the loss, Andrade decided to move up a division, making her flyweight debut. She won against Katlyn Chookagian in her first flyweight bout, which brought her the opportunity to fight Valentina Shevchenko for the title in this division.

Andrade lost but decided to stick around in the flyweight division. It proved to be the right decision as in her next fight, she defeated Cynthia Calvillo, getting to the #1 place in the divisional rankings.

This is the headliner fight for a reason – it’s going to be a thrilling one!

Although anything can happen in this fight, we do believe Andrade is a better fighter. She should be able to get a win on Saturday, possibly before the final bell.