Legalizing gambling in Alabama could generate hundreds of millions of dollars for the state coffers and create tens of thousands of new jobs, a committee set up by Gov. Kay Ivey reported Friday.

Formed earlier this year to assess the effect of a legal act in favor of gambling, the Study Group on Gambling found out legalizing the activity in the state could have a positive effect on the amount of $700 million in tax revenue annually and up to 19,000 jobs.

The comprehensive 876-page report also acknowledged legalizing gambling would come with a social price tag, but former Montgomery Mayor and chair of the committee Todd Strange noted during a press conference the advantages outweigh the costs.

“It is important to note, however, that while there are costs associated with gambling, the taxation of regulated gambling activities creates an opportunity to dedicate public funds to gambling treatment, prevention, or education services.”

Gambling in Alabama is forbidden by the constitution, the state does not have a state-run lottery and the debate whether the government should deal with the issue is still ongoing due to major conflicting interests.

Casinos in Atmore, Wetumpka, and Montgomery are operated under federal law by the Poarch Band of Creek Indians, and while local constitutional amendments facilitated electronic bingo at dog tracks in Macon and Greene counties, lottery attempts hit the brick wall in the Alabama legislature.

The Poarch Band is against any effort to solidify the legal status of electronic bingo at dog tracks, legislators from communities with dog tracks oppose a lottery, arguing it will allow the tribe access to electronic machines the operators of the dog tracks cannot have, and on top of this, several Republicans are known for having moral objections to gambling.

A gambling bill was planned for the start of the 2020 legislative session but Gov. Ivey requested a data-supported analysis of the impact before any bill was passed in the legislature. She issued a statement noting the committee’s report would be pivotal for any further consideration and debates on the issue.

The study group proposed 5 different options for legislators: do nothing; prohibit gambling but enforce existing laws by a state regulatory body, which will have its members nominated by the governor and confirmed by the Senate; legalize lottery only; legalize lottery and limited gambling such as sports betting; and, allow full gambling.

Any legalization effort would have to go through a constitutional amendment which will need 60% vote in both chambers, before voter approval. The report did not address how funds generated from gambling would be spent, though.

Alabama casinos believe that a recent court ruling against electronic bingo casinos might be racially-unjust. One of the casinos claims that the government is endangering the livelihood of many Blacks in the state. Alabama Cracked Down on Electronic Bingo Casinos The situation stems from the Alabama Supreme Court’s response to two appeals. The court’s decision […]

A former Alabama Sheriff lied in applications to get approved for loans needed to cover his gambling debt. His offense may cost him a fine of up to $1 million and up to three decades in prison. Norris Lied in His Loan Applications William Norris, 44, served as sheriff of Clarke County. When not fighting […]

Casino management and information software provider Table Trac has signed two new exciting deals with two different Alabama-based gaming operators. Greentracks and The Palace Bingo will be joining the list of Table Trac partners and enjoy the “unique platform and architecture” of their products. Table Trac is currently available in more than 270 casinos located […] 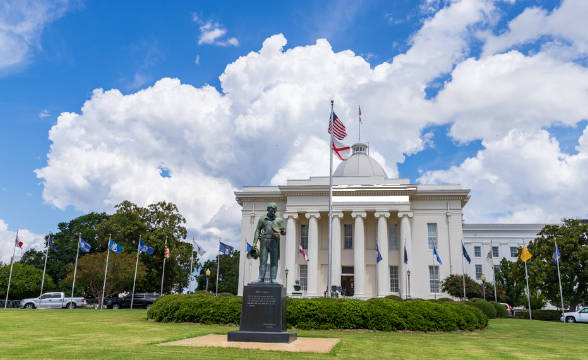 Alabama Is Once Again Denied a Regulated Gambling Market

Sports betting aficionados, lottery, and casino players in Alabama were getting ready to pop the champagne in celebration of the approval of a state lottery, casinos, and sports venues by the end of the year. The two separate lottery and casino proposals backed by Sen. Geg Albritton and Rep. Chip Brown were looking mighty fine […]

Alabama is restarting its efforts to expand its gambling industry, the first since 1999. This Thursday, a legislative committee in the state pushed forth a constitutional amendment that would seek to create a regulatory framework enabling lottery sales at first. Lottery Legalization in Alabama Back on the Menu in Alabama Right now, all residents of […]

A new Alabama bill suggests the creation of eight casinos and a state lottery. Will this bill have more success than the ones before it? It’s Time Alabama Got in the Game The bill was introduced on March 3 and seeks to capitalize on the growing gambling industry in the United States. One of the […]

Alabama has repeatedly shown significant resistance to the idea of casino gambling; however, lawmakers aren’t giving up. The state’s next legislative session will see the introduction of new lottery and casino legislation. The goal is to get the measure before voters in November. However, the prospects for getting the measure in front of voters are […]

The gambling climate in Alabama may be on the brink of a change, as the state’s greyhound tracks are joining the movement that supports the legalization of casinos, sports betting and lottery games in the state. The Alabama Track Owners Association (ATOA), set up by Greenetrack Bingo & Racing, Mobile Greyhound Park, VictoryLand and the […]

Alabama lawmakers left millions of dollars on the table when the legislative session adjourned yesterday afternoon. A bill that would have legalized sports gambling, casino gaming and possibly even a lottery has spent the past several months in the political quagmire in Montgomery, the state’s capital, hoping to find a path toward acceptance. That path […]