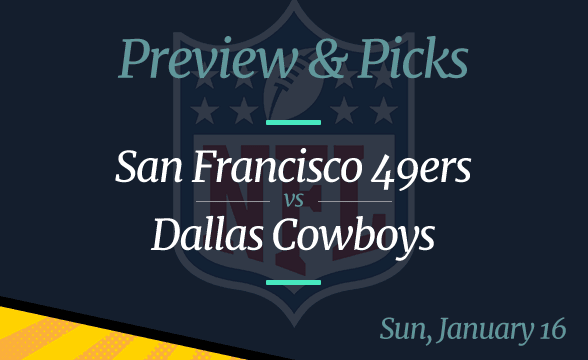 The Dallas Cowboys are coming to the postseason after winning the NFC South and finishing in the #3 position in the conference. As a result, they now get to play on their turf in the Wild Card playoffs against the #6-ranked team. The team in question is the San Francisco 49ers, who got to the playoffs after beating the Los Angeles Rams in the final round of the regular season.

All odds are per FanDuel as of January 12.

Niners’ Defense Looking Good, Their Offense Not So Much

In fact, one may argue that it’s their defense that got them to the postseason. They were brilliant in Week 18, keeping the Rams to just 24 points. In that game, the Niners intercepted two of Matt Stafford’s throws, as well as sacked the Rams’ quarterback five times – the most sacks he received as a Rams’ player.

The Niners’ offense, however, hasn’t been that great this season. Sure, they rank relatively high (#13) when scoring is concerned with 25.1 points per game. However, their next opponents are much better in that aspect. Actually, the Cowboys’ offense is the best in the league with 31.2 points on average.

What needs to worry the Niners is that their quarterback Jimmy Garoppolo has been making a lot of mistakes. For instance, we saw him throwing two interceptions in each of the previous two games. That’s something that Dallas’ defense will be looking to exploit on Sunday.

As per coach Mike McCarthy, all of Dallas’ key men are fit and ready for the Wil Card clash. This includes those players that missed the Week 18 game against the Philadelphia Eagles, which the Cowboys won 51-26.

The best thing is that he’s not the only member of the Cowboys’ defensive team who’s been superb this season. Another player worth mentioning is Trevon Diggs. The cornerback has recorded 11 interceptions this season, which is more than any other player in the NFL. It wouldn’t be a surprise if he made a couple of interceptions against Garoppolo on Sunday.

Picks: Dallas Cowboys to win and cover the spread; under should hit