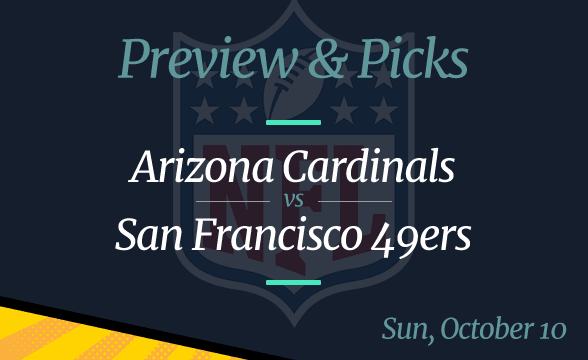 The Arizona Cardinals are the only NFC team that’s still without a single defeat. Can the Cards keep their good run going? Not if you’re asking their divisional foes, the San Francisco 49ers.

Although the Niners haven’t been too impressive thus far (2-2), they have a decent record against the Cardinals, with three wins in their past four meetings.

Still, judging by the betting odds, it seems that everyone believes we’ll see another win for Kliff Kingsbury’s boys.

All odds are per DraftKings as October 5.

The Cardinals starting quarterback, Kyler Murray, is now the top favorite for winning the NFL MVP award at +500 at most online sportsbooks. Before the season started, he wasn’t anywhere near the top of that list, with Patrick Mahomes and Aaron Rodgers being pre-season faves.

However, Murray has started the season in top gear, with a total of 1,273 passing yards for 9 touchdowns and only 4 interceptions. On top of that, he’s also scored three rushing TDs on his own.

Thanks to his output, Arizona has scored a total of 140 so far, which is more than any other team in the entire league.

Apart from being superb in the offense, the Cards have also been terrific, defense-wise. So far, they’ve given up only 85 points. This isn’t the league’s best, but bear in mind that they have faced some really tough opponents since the start of the season – Titans, Vikings, Jaguars, and Rams.

Their most impressive performances happened last weekend when they beat the Rams at SoFi Stadium in Los Angeles. The final score was 37-20, which was one of the Rams’ worst results in a while. In fact, the last time the Rams conceded more than 37 points was back in 2019.

The Niners are in a Desperate Need for a Win

The 49ers are 2-2 right now, which might not look too bad. However, they’ve already lost to one divisional rival. It happened last weekend when the Seahawks beat them 28-21 in San Francisco.

That was their second straight defeat and if they lose again, there’s a danger their morale would plummet. That said, losing to the Cardinals could put the Niners in a bad state. The only good thing is that after this game, they will have a buy, which should give them enough time to straighten themselves up.

Sure, they will be super motivated to do well on Sunday, but it’s not just about willpower. They also have some injury concerns in the offense. Their starting QB Jimmy Garoppolo seems to be struggling with an injury, meaning that we might see rookie Trey Lance taking his place.

In either case, the Niners just don’t look good enough to beat the in-form Cardinals, especially not in Glendale.

Pick: Arizona Cardinals to win and cover the spread; over should hit this time.