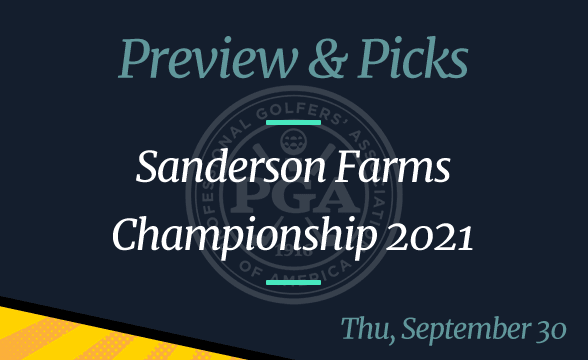 Sam Burns is posted at (+1400) at DraftKings, but he is followed by the likes of Will Zalatoris, Corey Conners, and some long-shots such as Cameron Davis (+3500) and Scott Stallings (+6000).

They will all have to face off with the defending champion, Sergio Garcia who is posted at a decent (+2000) chance to win this year’s edition. There are other former champions who will be attending the Sanderson Farms Championship as well, but they are worse-priced for the moment.

When and Where Is Sanderson Farms Championship

The 2021 Sanderson Farms Championship will take place on Thursday, September 30 with the tee times starting at 7:05 am ET at the Country Club of Jackson. You may further watch the event at Golf Channel.

Sam Burns is once again in the lead with his (+1400) and this isn’t surprising. Burns has had a great breakout season and he won a first PGA Tour event adding to his track record.  A single win may not have been so impressive had it not been for his eight Top-10 finishes. He is naturally now posted in the lead, although he is likely to face tough competition from Mito Pereira.

Pereira’s odds put him at (+2000). He has clocked three top-six finishes in five PGA Tour events, which shows consistency and the ability to continuously deliver good performance. Outside of that, the golfer has won three times at the Korn Ferry Tour, which got him in the PGA Tour in the first place. He has done well in terms of “strokes gained” and he definitely poses a threat to Burns as a great underdog.

Meanwhile, Scott Stallings at (+6000) won the event in 2012 but he has had a bit of a poor showing ever since. Stallings did well in both the Sanderson Farms and Fortinet Championship, though. Whether he can muster up his talent and push past his flagging performance is down to the golfer itself.

Another underdog here is Cameron Davis at (+3500) and he has had a fairly steady season. He won in the Rocket Mortgage Classic in July and that was the zenith of the season for the Australian player. Now, while he may not have ended up winning anything else, he has been fairly consistent in his performance.

The current odds price him out of the comfortable zone for most bettors, but Davis seems to be a good pick nevertheless. Backing Garcia here would seem like the best choice on the moneyline as he offers great value based on the odds.