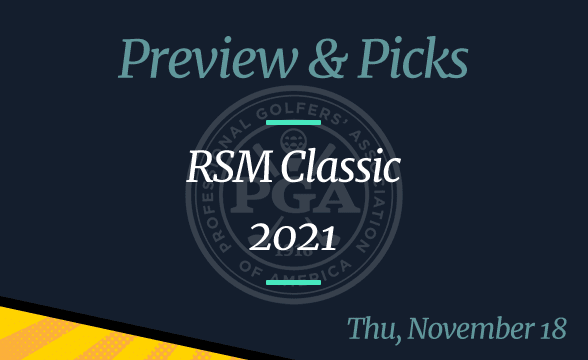 The RSM Classic might not be the most prestigious golf tournament on the planet, but history teaches us that it can be very entertaining. Even though there’s not much star power at Georgia’s Sea Island, the event has the potential to be incredibly fun.

This goes especially for bettors, who can choose from 150+ different players. Sure, some are better than others, but it seems we’re going to see a big battle for the title. Evidence of this is that there isn’t a single player with odds shorter than +1000.

There are only four players from the world top 25 who will take part in this tournament. One of those is Scottie Scheffler, who is seen as the main favorite for the trophy. That might come as a surprise to some, considering that Scheffler is still without a single PGA Tour trophy in his collection.

At the age of 25, Scheffler is still a relatively young player who could have a very successful future. There are signs that he could turn into a real superstar in the next few years. After all, the guy’s stats keep on improving all the time.

Still, there’s a big question mark hovering above his ability to win a major tournament this year. Actually, the RSM Classic might be his best chance to win a trophy in 2021; the trouble is that there are many other golfers who have basically the same plan.

Robert Streb is the defending champion, but oddsmakers doubt he’ll be able to pull off another upset. Streb winning the previous edition of the RSM Classic surely was a surprise, considering that the guy’s highest ranking is 31, which he achieved back in 2015.

Still, Streb’s win at the 2020 RSM Classic is proof of this tournament’s unpredictability. Underdogs seem to do well in this event, which is why great news for bettors. The big question is, which underdog should you back?

At +1600, Louis Oosthuizen looks like a dark horse of the tournament. The runner-up of the 2021 PGA Championship surely has the talent to do well at Sea Island.

Plus, he has the motivation to add more points to his name in the PGA Tour Rankings, where he’s currently sitting in ninth place. That makes him the highest-ranked golfer at the 2021 RSM Classic.

Pick: Louis Oosthuizen for the win.

Fortuna Teams with Enteractive for Player Re-Activation in Romania