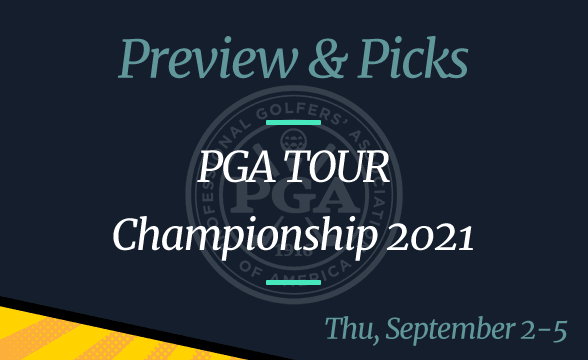 The PGA Tour Championship returns with the East Lake Golf Club outside Atlanta playing host to the best and brightest golfers this week. The race for the FedEx Cup Playoffs intensifies as this is the final event featuring the massive $15 million in prize money, too.

After the BMW Championship produced some surprise winners, with Cantlay claiming the first spot and DeChambeau ending up as runner-up, it’s time to take a closer look at the 2021 PGA Tour Championship and see what golfers will be vying for the first place.

Sportsbooks are betting heavily on Jon Rahm, though, who will start at (+550) with DeChambeau posted down the list at (+1400). Other worthwhile contenders here include Tony Finau at (+2200) and Dustin Johnson (+1300). Let’s take a look and see what the 2021 Tour Championship has in store for us.

The prize purse will definitely incentivize the field to play their best golf game. There will be many players to look out for with the FedEx Cup presupposing a lot of high-skilled competition. Rory McIlroy who won the 2019 edition is posted as the most likely runner-up in the event.

Then again, you have Dustin Johnson who has been able to capture the 2020 FedEx Cup title and he is also given (+1300) on the odds list to make the cut. Patrick Cantlay will be starting at -10, Tony Finau at -8 and Bryson DeChambeau at -7.

DeChambeau is given quite a decent chance to make it, based on his track record in events such as the WGC-FedEx St. Jude Invitational, and could be a potential winner for the title this year as we draw closer to Thursday and the start date. Tiger Woods will notably miss the event so he is no threat.

However, everyone else participating is tipped to win the Tour Championship. McIlroy won twice in 2016 and most recently in 2019. Johnson took the title in 2020 and Xander Schauffele did so in 2017.

The field is full of many potential surprises but who actually makes it to the top will become a little clearer after the first rounds of play.

Who to Look out for at PGA Tour Championship?

There are natural players you need to keep a close eye on. Johnson is one of them. Johnson will be defending his title and he has been doing quite well throughout the entire golf season this year. He has six top-10 finishes at the East Lake Golf Club, which means that he has a very good chance at placing first once again.

Schauffele won in his first showing at Eat Lake in 2017 and he did well in 2018. He further won the Olympics in Tokyo this year, posting him as an excellent player in the long term and shaping his prospects for a title in the 2021 Tour Championship a little better.

Then you have a really long shot with Sam Burns who is given (+3300) but who may nevertheless show some excellent plays. He hasn’t been doing too badly all through the BMW Championship and the WGC-FedEx St. Jude Invitational but his game needs more polish to make him a favorite. Still, Burns is an underdog to watch out for.

UFC Vegas 36: Till vs Brunson Odds, Picks, and Prediction