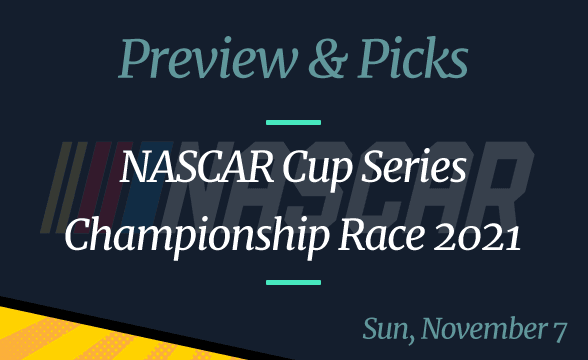 All good things must come to an end and the 2021 NASCAR Cup Series Championship Race on Sunday is one of them. The good news is that we have next season to look forward to. In the meantime, Kyle Larson is posted as the favorite for the Sunday, November 7 drive.

The Phoenix Raceway will play host to the last race of the season during the weekend, making for a great conclusion of a highly-contested season. In the previous race, Alex Bowman shot to victory, outpacing Denny Hamlin to secure his fourth victory for the season.

Even though Larson was tipped to win at the Martinsville Speedway and didn’t, he is still in the lead for this final race. This race will be unlike any other as we have four riders who have the exact same number of points.

Kyle Larson, Chase Elliott, Martin Truex, Jr, and Denny Hamlin have all won NASCAR Cup Series in the past and they are posted at 5,000 points for this season. In other words, the drivers are racing not just for a win at Phoenix, but for a win in the Cup Series which is a suspenseful way to wrap up the season.

When and Where to Watch NASCAR Cup Series Championship

Kyle Larson Is Back in the Lead for the Championship Race

Kyle Larson may have missed his shot at winning the last race, but here is the thing, he has won at Phoenix Raceway plenty of times. He did miss getting ahead at Martinsville and admittedly that allowed other drivers to catch up but all is well because Larson is coming in hot and he is determined to be crowned winner this season.

Apart from winning two races at Phoenix, he has also been able to deliver on five T-10 finishes in his last six races, so there is that. In fact, you may argue that he is the best driver out there when it comes to performing consistently well at Phoenix, and the oddsmakers have not hesitated to give him top marks as well.

Yet, Larson’s only way to win the Cup Series is to outpace Elliott, Truex Jr, and Hamlin and clock in more points in this final race. With Hamlin, Elliott, and Truex Jr posted neck-and-neck with each other, and just a bit behind Larson, there will be A LOT riding on him driving impeccably.

While this is true, we still see a lot of wild card potential in each driver. Actually, NASCAR interviewed Larson Elliott, Truex, and Hamlin and asked them why they thought they win the race, and we tend to agree with some of the points made.

Martin Truex Jr. may be posted as the biggest underdog of the four but he has been able to close in on the gap with the first and his last two showings are T-10 finishes. Yet, for this one, we would have to go with the oddsmakers and back Larson on the moneyline (+190);.