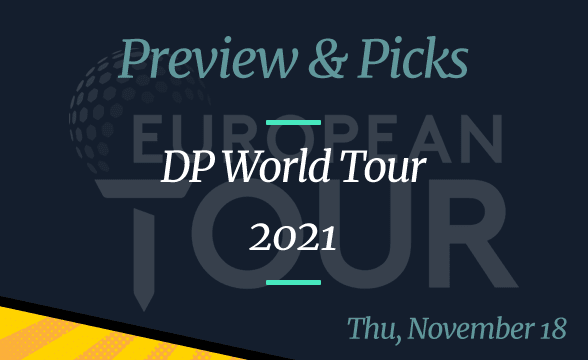 The 2021 PGA European Tour reaches the boiling point this week with the DP World Tour Championship Dubai. The tournament tees off Thursday, November 18, when we’ll see a number of elite golfers competing for the title.

Apart from the Championship title, there’s another trophy on the table – the Race to Dubai. Ahead of the tournament, two Americans are 1-2 in the Race to Dubai standings, namely, Collin Morikawa and Billy Horschel.

In addition to the two, there are a few other golfing superstars competing in this week’s tournament. Rory McIlroy is the biggest star of the event, as well as the main favorite to win it. Then, there’s also Matt Fitzpatrick, who won the tournament in 2020.

Jon Ram, a Spanish golfer who’s currently #1 in the PGA Tour Rankings, has decided to opt-out, thus giving away the chance of winning the RTD three times.

World Tour Championship Dubai – Where and When

Rory McIlroy is the betting favorite heading into the event, although the odds suggest winning the trophy isn’t going to be easy. The reason why the price of the 32-year-old is +550 is that he hasn’t achieved much this year.

Nevertheless, McIlroy remains one of the most successful golfers in the history of the sport. Even though he hasn’t been doing that great in recent times, we did see him winning two PGA Tours in 2021. Ahead of the World Tour Championship Dubai, he’s #9 in the PGA Tour, while in the Race to Dubai, the Northern Ireland golfer is sitting in the #20 position.

McIlroy surely has the skills needed to win this event, but so does Collin Morikawa. The 24-year-old American is the highest-ranked golfer taking part in this tournament, who’s been nothing short of brilliant in 2021.

The guy also has a lot of motivation to continue to play well as he has a chance to win the Road to Dubai title.

Can Matt Fitzpatrick Defend the Title?

Defending champion Matt Fitzpatrick comes to Dubai as the #3 favorite. The English golfer seems to love playing at Jumeirah Golf Estates, the evidence being that he’s done really well at this course. He played here on six occasions, recording the following results – Win, #9, T-34, #12, Win, T-4.

His worst performance in Dubai was the tie for 34th, which happened a few years ago. Since then, we saw him finish in the #9 position, as well as win the even in 2020.

The obvious question is can he do it again? He might, unless McIlroy or Morikawa stops him. Those three are the main candidates to win the World Tour Championship Dubai. They’re the best golfers taking part in this tournament, meaning that it’s very likely one of them will walk away with the title.

But, who’s it going to be? McIlroy is the betting favorite for a reason – he has the best chance to win the title.

Pick: Rory McIlroy for the win.