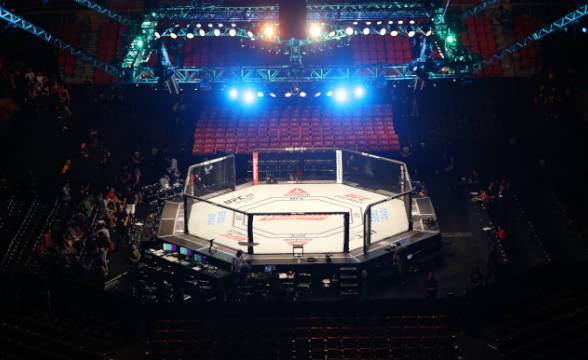 After a one-week break, the UFC is back again. The next event on the program is UFC Fight Night: Dern vs. Yan a.k.a. UFC Fight Night 211 or UFC Vegas 61. UFC Apex in Las Vegas, Nevada is the destination, and the date is Saturday, October 1.

The women’s strawweight fight between Mackenzie Dern and Yan Xiaonan is the event headliner, while there are another five fights confirmed for the main card. In this post, we’re going to preview the featherweight fight between Sodiq Yusuff vs Don Shainis.

After beating Mike Davis at Dana White’s Contender series in 2018, Sodiq Yusuff got himself a UFC contract. Since then, he’s 5-1, while his overall MMA record is 12-2. This weekend, he’s taking on a fighter who has a similar record (12-3) but who hasn’t yet fought in the UFC.

That said, it’s no surprise that MMA sportsbooks think of Yusuff as a huge favorite, with the Vegas odds of -1100. It seems that the question here isn’t whether Yusuff is going to win, but how will he do it. Knowing that he’s 50% of his wins happened by KO/TKO, it’s only logical to assume that the same will happen on Saturday.

Still, mixed martial arts (MMA) is a sport in which surprises do happen very often. In the most recent UFC event, for example, we saw underdogs win in two of the five main card fights.

Don “Shameless” Shainis is 13-3 in his professional career with eight wins by knockout/technical knockout. He’s on a 5-win streak, four of which happened by KO/TKO. Actually, he defeated his previous three opponents by this method.

Knowing this, Shainis needs to be thought of as a dangerous opponent. The reason why bookmakers don’t see him as too much of a threat to Yusuff is that he’s making his UFC debut on Saturday.

Before getting a UFC contract, Yusuff used to fight in promotions like Cage Titans (13 fights), Fighting Alliance (one fight), and Bellator (one fight).

We think Sodiq Yusuff will triumph in this fight, although we wouldn’t be surprised if we saw Don Shainis upset the odds with a KO/TKO win. That said, we think that – no matter who wins on Saturday – the fight will end inside the distance.

Picks: Sodiq Yusuff to win; fight not to go the distance