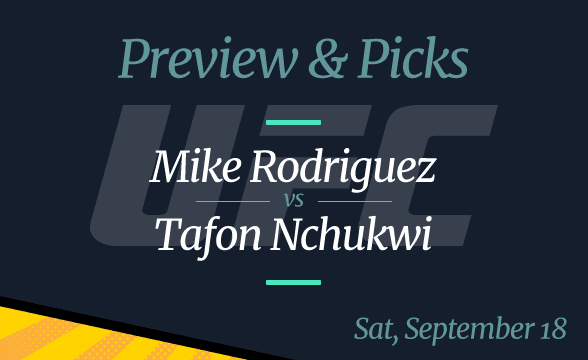 A big, big ticket is coming up on Saturday in UFC Vegas 37 headlined by Anthony Smith vs Ryan Spann. One of the fights worth paying attention to in the preliminary card is the bout between Mike Rodriguez vs Tafon Nchukwi that will be taking place on Saturday, September 18, at the UFC Apex in Las Vegas.

Even though the pair is minnows by UFC standards, they are both at a point in their career where they can start going up and make a mark on the MMA world.

Only one of the two will be able to do that, though, as the fight draws closer, the odds for both fighters seem to be very close to elect a clear favorite. A slight advantage is given to Nchukwi who is posted at (-121).

So the odds put Nchukwi in the lead. The fighter’s MMA career so far looks 5-1-0 which is too little information to know what to expect. He debuted in the UFC in September 2020 with a win against Al Matavao and quickly followed up with another one in December.

However, his only fight so far in 2021 has ended up with a loss to Junyong Park who won by M-Dec. The fight lasted five minutes, though, which demonstrates that Nchukwi isn’t someone to be easily worn down by a prolonged clash.

With the fighter not having made much of an impression other than his balanced fighting style, he is given a slight edge over his opponent.

Rodriguez’s track record puts him at 11-6-0. He has nine appearances in the UFC with a tenth this Saturday. His last two fights were a loss, one again Danilo Marques and Ed Herman respectively. Overall, Rodriguez seems to have a lot to work on.

He has shown grit and determination but he seems to lack that seal-the-deal quality that would allow him to enjoy a slightly better shot at a win on the weekend. Yet, Rodriguez is not nearly out of the fight, so don’t bet too heavily against him.

2021 Fortinet Championship Odds, Date, Time and Where to Watch