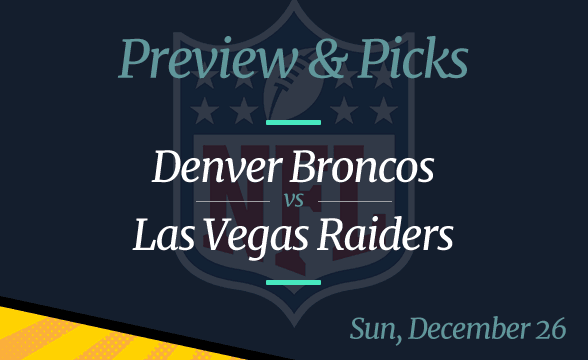 The Denver Broncos starting quarterback Teddy Bridgewater suffered a concussion in the game against the Cincinnati Bengals last week, which his team ended up losing 15-10. Because of that, he will miss the Week 16 game with the Las Vegas Raiders, which could be crucial for his team’s playoff struggle.

The reason why this game might be crucial is that both the Broncos and the Raiders are in the race for a Wild Card berth, both with a 7-7 record. Winning on Sunday would practically mean knocking the losing team out of the playoff race.

All odds are per FanDuel as of December 23.

Broncos Putting Their Hopes in Their Defense

Bridgewater has thrown for 18 touchdowns so far in the 2021 season. Plus, he scored two rushing touchdowns on his own. Knowing that the Broncos have scored 31 TDs in total this season, you can see how important their starting QB has been for them.

He isn’t going to play on Sunday as confirmed by the Broncos coach Vic Fangio. Instead, Drew Lock will make his first start of the season. Although he hasn’t started a single game in the 2021 season, he did play in three games, throwing for one touchdown along the way.

Bridgewater’s absence is likely to cause problems for the Broncos’ offense, which hasn’t been too productive anyway. They’ve scored 285 points in 14 games, which is better than just three teams in the AFC.

The reason why they’re still in the playoff race is that their defense has been sensational. With just 243 points conceded thus far, they are among the best in the conference. In fact, only the New England Patriots have conceded fewer points than them in the entire AFC.

The Broncos’ defense will have to do even better than usual if they want to win on Sunday. With their offense likely to score below their average, the defensive team will need to step up.

Raiders Looking for their Four-Straight Win Over Broncos

The Raiders won their previous three clashes with the Broncos, including their first divisional game of the season. The game in question took place in October on Denver’s turf and the score was 34-24 for the visitors.

If they could beat their AFC West rivals, the Raiders would make one giant leap toward the postseason. After the Broncos game, they play against the Indianapolis Colts and the Los Angeles Chargers, both of which are also dreaming of the playoffs.

It’s not going to be easy for the Raiders, but they have the motivation to win all three. If they do it, they would probably qualify for the playoffs only for the second time since the 2002 season.

Picks: Las Vegas Raiders to win; under is likely to hit