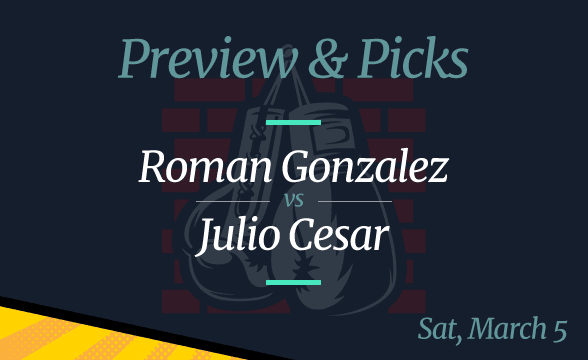 Pechanga Arena in San Diego is the place where Roman Gonzalez and Julio Cesar Martinez will lock horns in a WBC super flyweight fight. Originally, Gonzalez was supposed to fight Juan Francisco Estrada for the third time, but the latter tested positive for COVID. Martinez stepped in as a savior of the event, but with a limited time to prepare for the fight, he’s seen as an underdog by online sportsbooks.

All odds are per FanDuel as of March 3.

Roman Gonzalez Looking to Get Back to the Top

At the age of 34, Roman Gonzalez is an experienced boxer who used to hold world titles in four weight classes in the past. He lost one title in his most recent fight when Juan Francisco Estrada beat him by split decision. It was only the third loss of his professional career which started back in 2005.

Throughout nearly 17 years of fighting at a pro-level, Gonzalez won a total of 50 bouts. If he wins once again, it’s almost certain he’s going to get another shot at the title. If he loses, such a scenario might not play out. Knowing this, it’s clear that he’s going to be super motivated to win on Saturday. The question is whether Martinez has the skills to give him a run for his money?

Julio Cesar Martinez is the reigning world champion in the flyweight division. He will keep the championship belt in his possession regardless of what happens in the bout with Gonzalez, as the two meet in a super flyweight bout.

Although he’s seen as the underdog, this fighter sure has an amazing pedigree. He has 18 wins in his portfolio, with just one loss so far. The best thing is that the loss in question happened a long time ago – he lost to Joaquin Cruz in his professional debut back in 2015.

During his invincible run, Martinez got ahold of the flyweight title in 2019. Since then, he defended the title five times, showing the world he’s an elite fighter. Still, the fact is that he’s not as experienced as his next opponent, who’s played 31 fights more.