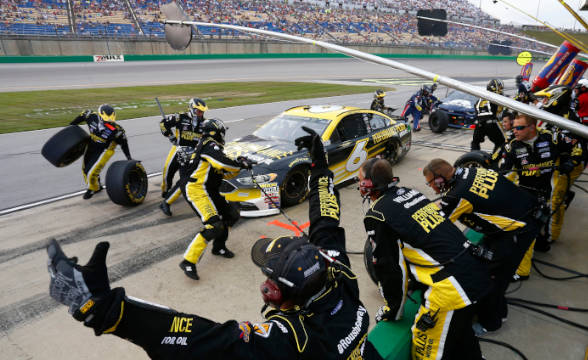 The 2022 Quaker State 400 is the next event on the NASCAR calendar. The 19th race of the season is run on Sunday, July 10, at Atlanta Motor Speedway, some 30 miles away from Downtown Atlanta. The venue features a 1.54-mile oval racetrack which has been used by NASCAR since 1960.

Given the reputation of this event, it’s only logical to assume all of NASCAR’s superstars are dreaming about triumphing at Quaker State 400. That’s something that not many drivers actually achieved, at least not since the start of the 21st century. In fact, legendary Kurt Busch is the only active NASCAR driver who’s won the Quaker State 400 race – he did it in each of the previous three editions of the race.

Online bookmakers, however, don’t think he’s going to do it this year. Instead, Busch is seen as one of the underdogs, priced at +2500. Kurt’s younger brother Kyle, on the other hand, is given much better odds. He’s seen as one of the potential candidates for the #1 place, with the odds of +1200.

Kyle’s odds might seem pretty long, but there’s just one driver who’s given a shorter price than that. The man in question is the current leader in the Drivers’ championship, Chase Elliott, who’s the #1 favorite to win the 2022 Quaker State 400 race with odds of +1000.

Reasons Why Chase Elliott is the Betting Favorite

The winner of the 2022 NASCAR Cup Series, Chase Elliott is seen as the no.1 favorite to win the event in Atlanta. No surprise as Hendrick Motorsports’ driver has been fantastic in 2022. Even though the season started slowly for him, Elliott has been able to improve his stats and get to the #1 position in the Drivers’ Championship standings.

The 26-year-old won his first race of the season on May 2 in Dover. Before that, he didn’t even finish in the Top 3 in the 10 races run by then. Elliott’s form dipped a few weeks later, but he bounced back with a win in Nashville on June 26. Then, on July 3, he finished second at Road America.

A week later, Elliott is determined to do at least as equally well. He’s got a special motivation to win this race as he messed it up last year. Even though he had the pole position at the start of the 2021 race, Elliott ended up in the #7 position.

Kurt Busch is one of the most successful drivers in the history of the Quaker State 400 race. He is the winner of the previous three editions of the race, but oddsmakers don’t think he’s going to do it again. The reason is that Kurt hasn’t been too impressive in 2022. In fact, he’s currently 15th in the Drivers’ Championship rankings.

His brother Kyle, however, has been pretty good this season. The winner of the 2021 NASCAR Cup Series is currently sitting in the #4 position, which is a pretty decent accomplishment. However, Kyle wasn’t more. The reigning champ is determined to get to the top, but for that to happen, he needs to start winning more races.

As a reminder, he’s won just one race in the 2022 season. It happened back in February when he won the 2022 WISE Power 400 in California.

Kyle Busch finished second in the last year’s Quaker State 400 race, while in 2008, he triumphed at Atlanta Speedway. Knowing that he’s the reigning champion who’s trying to defend his title, it’s certain that he’ll be super-motivated to win on Sunday. Considering that his form keeps on improving, we wouldn’t be surprised if he ended up winning the race.

Bacta: Next Gov Should Tend the White Paper ASAP